Helpless hostages. Insanely fit hard bodies. Kinky, sexed up secret agent lesbians, Sammy and Kourtney, have been taken down, bigtime. The dreaded Hog Beast has them gagged and bound in his demonic workshop. The beautiful babes have lost none of their toughness, however, even after repeated about the firm rumps and titties, and now having had to endure some jaw flexing knotted cleave gags. Told they will soon being taken up to the main house for some REAL fun, the feisty captives protest in highly muffled indignation. For FAR more forbidding gags are to come!

Trussed up like chickens in the fiends gloomy attic is that a severed MONKEY head over there?? – the gag talking, super tightly cleave gagged hostages are soon introduced to some thick mouth packing and some even thicker repeated tape wraps, creating real jaw breakers. The babes still fight it though, and so have ropes wrapped around their necks, further restraining them. These two are most definitely holding out for a hero and one who may never come!

After some more hot tit grabbing and arse slapping, the bound hotties seem to forget where they are at and start trying to gag kiss with those wide, insanely stretched mouths (worth the price of admission alone) but are soon caught in the act. Seeing as the hot bitches are enjoying themselves so much, this demented Hog Monster lashes them into stupidly tight and close hogties, adding even more pressure to those tightly cinched elbows, and leaves them to buck and drool, gag talking as much as they are able and basically thrilling us to our cores with every muscular body pop. These two fitness stunners were MADE for the old hard hogtie, and so we keep them like this for a wonderful interval. Enough for even the most insatiable hogtie fan to really get to grips with. Like all of our hogties, we believe in doing them – extremely. The pressure on those joints can almost be felt. These serious, serious gags stretching the babes to their absolute limits.

Now, these girls are, in reality, extremely tough customers, trained gymnasts and dancers, strong, dominant women. Bound and gagged, they add that essential Borderland vinegar, in warm lashings. If you saw the earlier entry in this series, and are now officially in love with these incredible looking ladies, this will too will be uploaded to your device rather soon, we would imagine. In the meantime, what is that Hog Beast doing now?? Trying to shove the girls own bikinis into their gagged mouths. Mental. And what an outlandish finish! Bravo! 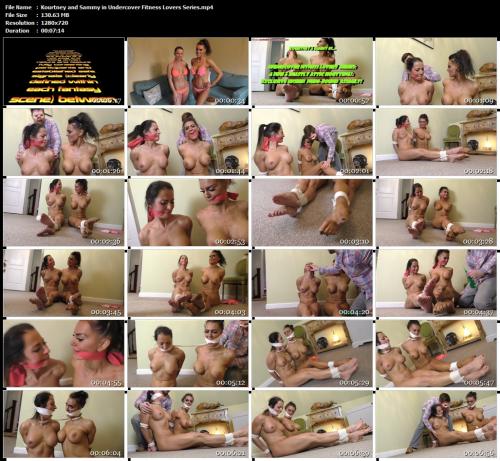