The robber waits till a little after 2am, and then he makes his move. Surely everyone is asleep by now. He creeps up to the window and looks inside. All is quiet. He makes his way to the back door. He is just about to break the small side window when he decides to first check the door knob. It’s unlocked!

He moves quietly down the hall, casing the place for a big score. He loads up on things that he knows will fetch a nice price. He moves past the bedroom. What is this? He sees that the woman of the house is sleeping.. Alone.. He sets down his bag, creeps in, and gently pulls back the covers. She is the most gorgeous thing he’s ever seen. He watches her sleeping for a moment. So peaceful. Wearing a loose satin nightie and some little thong satin panties.

He looks back at the back he left in the hallway. His mind wanders. He thinks about the money he’s going to get once he fences these goods. He looks back at her. She is everything he’s ever wanted.

In a split second he makes his decision. He sneaks back over to the bed.. As he puts his hand over her mouth, she wakes up and frantically tries to move. It’s too late. He’s already on top of her tying her wrists behind her. He grabs a scarf of her dresser and shoves it in her mouth. He throws her up over his shoulder and heads for the van.

He takes her to his hideout on the other side of town, where he pulls her inside kicking and screaming. She’s making a lot of noise and calling out, so he grabs a huge ball gag out of his cabinet and shoves it into her mouth. He also grabs a bag of rope and takes her over to the bed he has set up, where he begins tightly wrapping rope around her struggling body.

Once she is tightly hogtied and he is satisfied that she cannot escape, he stands up and looks over his prize. He knows he made the right choice. She looks amazing.. Thrashing around on the bed, glaring at him from behind that huge ball gag. “You are going to have to stay here awhile till I set up a place for you dear. Ill be back for you a little later.” 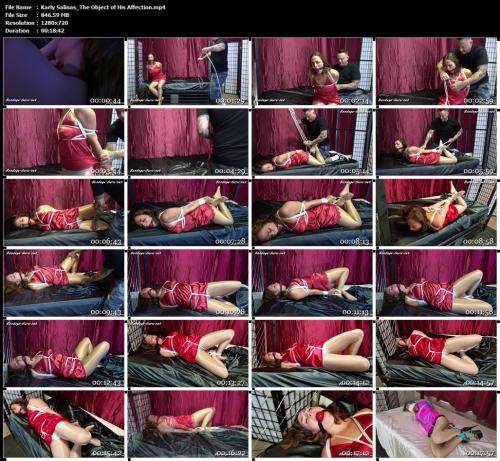