Poor Karly is let down from her doorway predicament, but she is not done being punished by her sadistic boss. She sits on his couch untied except for that horrible crotch rope. He explains to her that if she wants to keep her job, she must to submit to bondage through her lunch break. She believes she’s been punished enough, but reluctantly submits. He ties her legs tightly together and ball gags her again. He rolls her over onto her belly, catches her wrists and ties them to her crotch rope behind her, and then pulls her up into a hogtie. He leaves her telling her he will be back for her after his lunch. Once again mortified that someone is going to walk in and find her, she struggles to free herself. Its no use. He has tied her up good and the only thing she is succeeding in doing is digging that crotch rope deeper into her aching pussy. After the lunch hour passes, her boss reappears. He unties her, but again leaves the crotch rope in place. He and sits her down on his lap and makes her promise not to steal from the company again. She looks at him with big apologetic eyes and says she has learned her lesson. He pulls her skirt down over the crotch rope. He tells her he is glad to hear that she is sorry, but that she must work the rest of the day with the crotch rope tied hidden under her skirt. Once again horrified she protests. She can see it showing plain as day from underneath. “Everyone will see it!” she pleads. “Well then you better sit at your desk and get some work done.” comes his answer. She stands, straightens the skirt as best as she can, and returns to her desk. 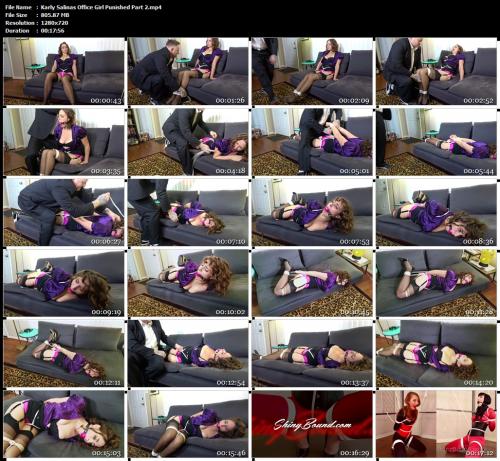