Fiona Sinclair had decided since today was her only day off that she was going to enjoy herself at the beach. She packs a bag with her sunblock, towel, water bottle, and that book she’s been slowly chipping away at and heads down to a quiet spot away from all the slashing around. She sets down her towel and settles into her book. The warm glow of the sun feels great and she wonders why she waited so long to take some time for herself.. A handsome man jogs by and is checking her out. He confidently strides up to her and starts a conversation. They talk for a while and the subject of animals comes up. She has an absolute weakness for , and he invites her to his house just up the road to see his new puppy. She can’t resist the offer.. She packs up her things and they walk down the beach together talking and laughing. When they get to his house, he quickly grabs her hands and ties them behind her. In part 1, he tethers her to a post on his bondage rack. She tries to protest and get away, but he overpowers her. He gags her and then takes some home video of her struggling and threatens to release it on Youtube if she tells anyone about it. In Part 2, he hogties her tightly on the bed. He stuffs her mouth with some satin panties and then wraps her face with tape. She’s now completely helpless. she struggles around and tries to call out, but she’s stuck there until he decides to untie her. This was not what she had planned for her day off… 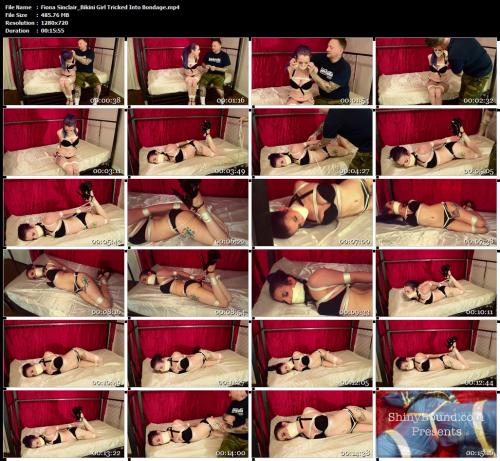 Dressed Up And Bound Up – Toe-Tied – Fiona Sinclair