Well, these two ultrababes certainly did slip into something more comfortable – or rather, into the foreboding Old Monkey Shines Place, hot on the scent of some truly fiendish baddies. These dudes are not only dealing in rare Canadian Bearskins (they ARE rare, ok?) but the buggers are stealing them first! By the truck load, blast their eyes! And it’s up to our daring bust-buckets, rather fine agents of law and orderliness and all that jazz, Emma, and Emma, aka Agents G and C, to stop ’em. Snooping around the place, seeing what they can find while bending over a lot, the insanely hot babes are picked off one by one by Horace P Liverwurst, one of the chief goons of the Bearskin Stealers. This clown knows just what to do with bothersome sleuths like these two. Tying the protesting beauties up in chairs, he harshly cleave gags both into super-mufflement and heads off for more rope, allowing the legs-crossed beauties (man, those legggggssss..) to struggle and await further hot bondage. Thus bound up thoroughly, their feistiness expertly contained, the babes have their angered gobs stuffed with foam balls and sealed in with strip after strip of extra sticky duct tape. Then they are left to squirm in their very uncomfortable and super tight restraints while the bad guy heads off to tell his buddies that these two aren’t available to warn anyone of what they’ve stumbled upon. Cue some very cute gag talk and chair wiggle fests until he comes back much later wielding some juicy ballgags. In they go to the humbled agents’ hot little mouths and again they are left to gurgle and drool. Returning later to check on them; rather than relieving them of those tight rubber seals, the dude actually binds them manically with medical wrap, jamming those badboys in good and proper and painfully double gagging the gag-effusing babes! Can you imagine the humiliation wrought upon these usually all-powerful stunners? Oh very dear. Anyway, having whipped off their shoes and bared Agent G’s gorgeous tits, he announces the pair of captives will soon be stripped entirely naked and SPANKED, again and again while they wriggle hogtied and gagged beneath his wrath. Cool! Won’t that be fun, folks, it’s in the post too. Part 2, coming at you all too soon. Make no mistake; by the way, this clip is GAG CENTRAL.

Let’s stuff the very PANTIES into these meddlesome bitches’ damned mouths, shall we? If this floats your junk, you’re in good, good company, stout yeomen, for the Bearskin Rug Stealers are in complete agreement with your desirous asses. Our captured agents are stripped completely naked and very stringently bound and quite awesomely cleave gagged. How tight do you want ’em? You KNOW we deliver.. Anyway, the struggling and mmmmmmppppphhhhhing beauties are wiggling their sexy bare feet and mumbling oh so incoherently through those fiendish cheek-pullers of gags, and, we shall note their pretty lace underwear lying nearby… Both bound and silenced lady agents know that after a while of dealing with these tight gags, they are gonna get a whole lot more serious! Later, Horace P steps back in to confirm. And now it’s time to really humble the enraged, gagged up stunners. One by one, the babes have their own undergarments thrust deep into their mouths and must endure a whole lot of tight ass tape wound and wound around their gorgeous heads, cleave style to keep the girls choking ’em back good. MAMMOTH gags here, folks, just as you like. Then the bewildered beauties are left to go at it again, gag talking and straining with those incredible chests of theirs surging forth quite, well, majestically wouldn’t be too grand a term for it, we have to observe! After much, much hot ‘gag dealing’ (a term we’ve cheekily coined for putting up with the big ol’ gags) and squirming, the outraged, nude agents are trussed into close hogties and now brace yourselves – SPANKING ROUTINE – Both wriggling babes have their buttocks nicely reddened by the perverted Liverwurst and are then left totally violated and in need of some major rescuing. Especially now it’s been revealed that they are being prepared for disposal by the gang of crooks! Ah well, in case that DOES happen, let’s settle back once more and enjoy the final act in this amazing tight bondage adventure and enjoy to the full these awesome, boobilicious babes wiggling and bucking and twisting and turning in glorious nude and barefoot Hogtie Heaven. Epic, epic stuff, dudes and dudettes. Raise a frosted glass of your favourite beverage to these dastardly Bearskin Boys, for they know precisely how to deal with bothersome, hot and sexy little snoops. Trussed as tight as fine salamis and monstrously gagged with their own underwear shoved on in there too, what more could you ask for.? 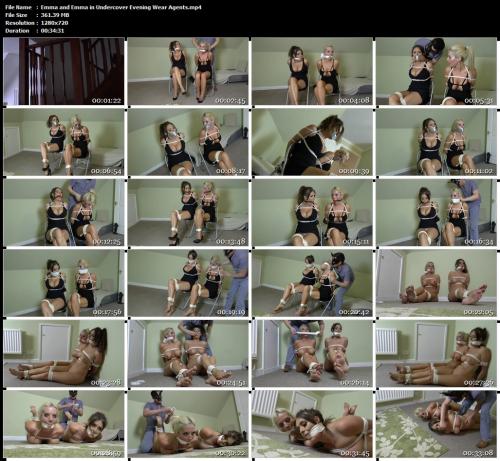