Eden watches another girl leave her neighbors house. She mumbles under her breath.. “How does he get all of these girls coming and going? Why is there so much moaning coming from the house during the day? What is going on over there?” Finally Eden’s curiosity gets the better of her and she marches over there to find out just whats going on. She pounds on the door and he answers. She shoves past him into the house and demands to know what he’s doing to these girls. Just then she glances down and sees all of the neatly coiled rope and tape and it hits her.. “You’re tying girls up in here?!” Just as she finishes saying it, he grabs her and starts to tie her hands behind her. She fakes a little protest, but she really wants him to tie her, so she gives in to him pretty easily. He ties her all up and fondles and spanks her. He tape gags her and leaves her hogtied while he cleans his house. About an hour passes and he comes back in and unties her. “Is that all you’ve got?” she asks while picking the Hitachi vibrator up off the floor and flicking it on.. He hands her a PVC catsuit and tells her to put it on and follow him to the other room. 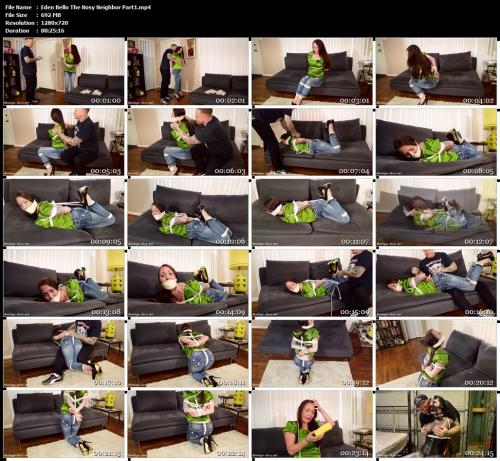