Desiree is fed up with the rude patrons at the strip club tonite. She is so sick of them grabbing on her and being cheapskates with the lap dances. She sees an easy mark in the corner booth. Thinking she will make some quick cash by rubbing up on him, she goes to work. She does 2 full songs worth of dances in front of him and then turns and says ” that will be 20 bucks..” The man protests that he didn’t agree to give her anything at all, and that he thought she just really liked him. All of a sudden the man is surrounded by large club bouncers that look like they mean business. He mutters something and hands her a twenty and leaves…

Later that night after the club closes and the lights are out, she is walking out the back alley to her car. Its late and she is a little tipsy from the night of partying. A dark figure comes out of the shadows and before she can yelp, she is wrestled down and a ballgag is shoved in her mouth. She tries to scream, but she’t too panicked to make a sound. He rolls her over and easily catches her wrists and ties them together tightly behind her back. He picks her up over his shoulder and shoves her into the trunk of his waiting car. He ties her feet down to the spare tire to keep her from kicking and slams it shut. He drives her out to an abandoned warehouse where he’s about to teach her a lesson in stealing from people….. 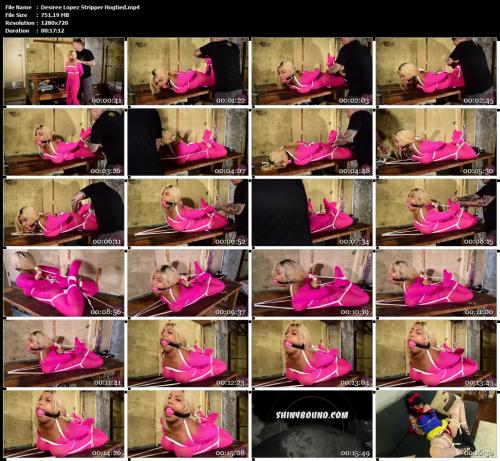 Vesper and Desiree.. 2 For 1 – ShinyBound Productions