“Whats that?” Cassandra heard a noise downstairs. She peeks down, and then heads down to investigate. Bad move Cassandra. The villain springs forward, and after a brief struggle, subdues poor Cassandra and drags her off.

When she comes to. she is laying on her couch. Somethings not right. She tries to move. The sound of chains sliding and metal clanking. She thrusts up but she is completely incapasitated. Wrists and ankles as well as her neck all have heavy metal cuffs locked in place, and there is a short thick log chain that runs vertically connecting them all together. She tries to call out, but there is a ballgag in her mouth that is pulled so tight she can’t even open it. She tries to stand, but the short chain between her ankles and neck keeps her hunched over and only able to take the smallest steps. She inches her way towards the front door. She unlocks it and tries to pull it open, but the security lock up out of reach catches the door and keeps it from opening more than a couple of inches. She is a prisoner in her own house!

She hobbles her way over to the window. She bangs on it and tries to call out for help, but no one hears her. She turns and carefully heads back to the couch, trying not to fall down as she goes.

Whats this?! Her phone is laying on the floor by where she was grabbed. What luck! She inches towards it and squats down to try to pick it up. Quite a chore in the predicament she’s in. Just as she almost has it in her grasp, the villain returns and takes it from her! He brings her back up to the couch where he fondles and gropes her huge satin covered titties. He attaches a lead chain to her collar and pull her out into the garage to his waiting car.

He drives her to the other side of town and pulls into a roll-up door in a darkened alley. She tries to fight him off as he pulls her over to the bed in the hideout, but she is chained and no match for him. He changes her tight ball gag to a panel gag and chains her collar to a hook above her. Once again he fondles her as he tells her that she is to be a sex slave for a rich man that bought her. She screams and moans through the gag and tries again to break free.

“Sorry love, you aren’t strong enough to break steel. Your buyer will be along shortly, so get comfy.” 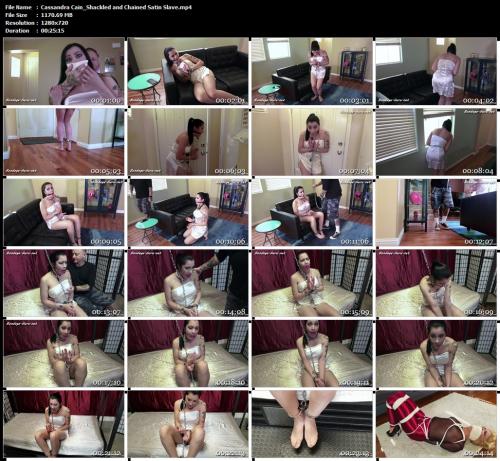