Caroline Pierce is an over worked public defender in the city. She works tirelessly on case after case defending would be criminals from prosecution for their alleged crimes. Sometimes she can really help someone, but most just fall through the cracks of the legal system and end up in prison. Such was the case of the Horace Pinker, an appliance repairman that got sent up on a bad rap. He fit the description of a notorious criminal and happened to be at the wrong place at the wrong time. Despite having an alibi and proof he was elsewhere, the over worked public defender dropped the ball and he got sent to prison for life.. 2 years later.. A guard walks by his cell. He’s not in there and theres a makeshift tunnel under his bunk.. He’s escaped!! They put out a statewide APB on him, but he’s covered his tracks well. They figure he’s probably long gone.. Which he surely will be, right after he pays a visit to the home of the lousy DA that failed him.. Caroline awakens.. She’s groggy and her head is swimming. As she gains consciousness, she realizes she is tied up. She squirms to get free, but to no avail. Just then a man in an orange jumpsuit appears in front of her and it all comes back to her.. He hogties her, rips her nylons off and her blouse open and gropes her. He tells her that he couldn’t leave without saying goodbye to her. He adjusts her ropes tighter and then disappears, leaving her strictly hogtied, gagged, and bound to the bed frame. What will she do? Its the beginning of the weekend. She lives by herself. No one is going to realize she’s gone till Monday! 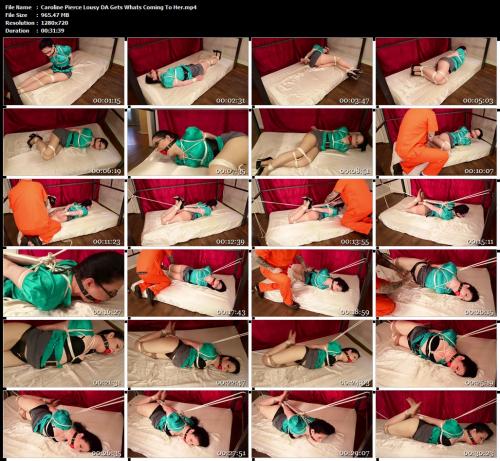