Curious Caroline steps into the open door and finds herself in the middle of a strange room. Theres a large metal frame with what looks like a bed mattress on it and some weird leather items scattered about. Before she can poke around for too long, she is grabbed hand over mouth by an unknown assailant! When she comes to, she finds she is tied tightly to a chair in the same room. She is gagged with layers of duct tape over whatever was first stuffed into her mouth. She struggles to get free, but its no use. She can not escape the ropes. Her nervous fear begins to turn to excitement as the ropes bite into her flesh and bruise deep. Oddly, it feels really good.. Her struggles intensify and she can feel herself getting wet inside of her pantyhose. The man returns and asks her what she was doing poking around in his dungeon. He agrees to untie her and let her go as long as she doesn’t come back and doesn’t tell anyone. She agrees and he takes off her gag. She spits out a mouthful of huge sponge balls and then confesses to him how much she loves being tied up. She tells him that she has secretly wanted that to happen for years. He hands her a PVC catsuit and asks her if she’d like to stay a while longer.. 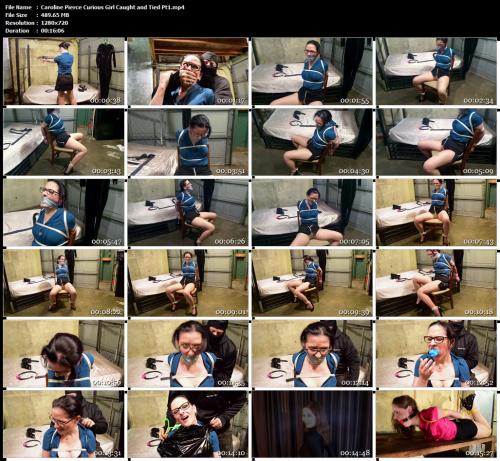