So, you like girls having their own panties being shoved in their mouths before getting gagged up good? Welcome to Dr Bondage’s Place! Squeezed – for these two surely must – into incredibly sexy cocktail dresses, Candy and Teejay are investigating – undercover, naturally – some shady disappearances and are drawn to the one house on the street they haven’t yet spoken with the occupant of. Rumour has it the dude is running some sort of Bed & Breakfast deal. Worth checking out, he may have some answers. Finding the place open and accessible, but with nobody around, they decide to have a good sneak around – not realising that they’ve infiltrated the home of none other than Dr Bondage Hisself! And boy, does this fella enjoy a good GAG. Glancing through a kinky smorgasbord of ropes and gags and cameras and tripods and all sorts of evidence of people having been “held” and “used” here, the girls go into hyper drive and so you can imagine their double shock upon preparing to radio this one in when they are taken hostage by the Mad Doctor himself and led away at persuader point with their hands up in sexy surrender. The pair of ultrabusty hotties are then all tied up with arms overhead in the garage and as they remonstrate sassily with their captor are one by one viciously ball gagged with some massive gobstoppers indeed. They sputter and drool while having their gorgeous, bronzed legs trussed up and their huge chests unleashed before the roving perv feels the girls cracking bodies up, spanking them repeatedly as they try hard to twist from his touch. Leaving them to struggle and gag-grunt, locked up in the garage for a while, he gets a nice fire going in the living room, preparing for his two guests. When he comes back for them – after a few hours (stick with the plot – the meddling snoops are herded through the place and stripped naked before having their own underwear shoved deep into their fuming mouths and then are insanely tightly tape wrap gagged before being further bound and left to struggle on the floor awaiting an unceremonious dumping onto the sofa to wriggle and writhe in huge, unadulterated nakedness. This explosive adventure comes as the first part of one heck of a sexy nude bondage romp and the duo are simply out of this world, completely at the mercy of the tight gagging doctor, who it turns out still has much more up his hideous sleeve for the urgently struggling tit machines. Have a blast with these massive-boobed Playboy girls starring as hotly as ever in one of our favourite roles as captive super sleuths undergoing some wickedly tight gags and bonds. Our ball-achingly beautiful and heart- belabouringly buxom interlopers have been rudely stripped of their dresses and forced to cram their own underwear into their mouths before being tightly bound and gagged and dumped onto a sofa to struggle mightily. Teejay even manages to get her nude ass into pole position for a good hop but her ankles are bound so tightly all she can do is fall back in defeat while Candy undulates her incredible hips beside her, thrusting her ‘you know what’ this way and that as though writhing in something akin to, well, ecstasy! Who knows. maybe she quite likes being bound and gagged by sadistic asswipes like Doc Bondaaaaage?? Anyway, talking about this character, he’s back and now swiftly ropes both into stringent floor-bound hogties, mauls them about excitedly, and then leaves them to twist and ‘shout’ in these juicy tight ties. As the gagged and bound captives roll and struggle very sexily on the living room rug, their desperate, muffled (HIGHLY muffled) communiques make for sweet listening indeed – oh and those Herculean boobs, man, you just KNOW they are gonna BOUNCE while the stunned and utterly subdued pair do their best to try and escape their ropes, by, um. arching their sweet bums and feet a lot and moaning and groaning as though a little, shall we say, turned on at times. rather than ‘outward freaked’ by these sinister developments. Then the mood pops again and it’s hearty gag-talk time, which these incredibly restrictive wraparound and tape stuffed gobs convey wonderfully. You really have to marvel at just how tight these damned things are… Only at Dr Bondage’s House o’ Tight Gags, eh?? Well. not especially, because you can see many, many more here among the Borderland Bound archives and for sure you’ll see many more. What a supercharged, intense finale then to the Good Doctor’s first appearance. Want to see him again? Drop us a line, order a custom, and we’ll call him downstairs to untie these two and then lie in wait for the next cartoon-like gorgeous hotties to put in a special guest appearance. Another megasexy entry into the Teejay and Candy files here. More to come from this pair soon, we dare say. Enjoy your Sunday’s! What are you up to? 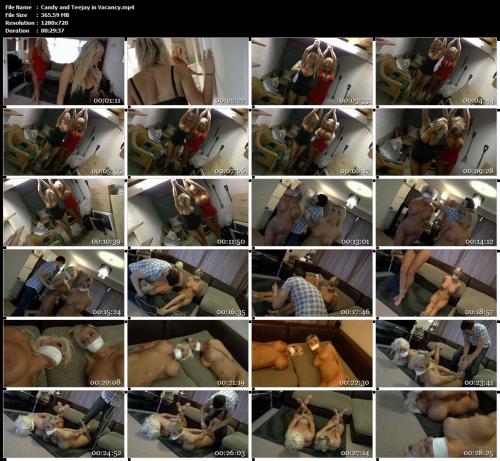