Borderland Bound – Nicky in: With Special Skills, They Mind-Bent the Beautiful Officer into Getting Undressed – & Left Her All Tied Up, Uniform ‘Assumed’!

Ravishing Officer Philips cannot BELIEVE this! Coming out of her trance to discover she’s trussed like a turkey, and with a huge handkerchief crammed and tied into her mouth – NAKED!! Where is her uniform?? Grrrmmmmm!!!!!

A beautiful fashion model changes careers and joins the good old police force to do battle against criminals simply because she relishes the challenge. It’s quite one thing being the bell of the catwalk but there is nothing as exhilarating as yanking the villains off of the street and seeing to it that they serve their well-earned spell(s) behind bars. Speaking of which.

Dr Rupert MindBender has more recently been operating out of an old house near the seaside, some might venture, with impunity. Conning rich ladies out of their fortunes is his game, and mind-controlling them at his place is how he likes to go about it. The gullible girls show up and tell him all about their peculiarities of mind, and he’s only too willing and capable to take full advantage of them, persuading the vulnerable marks to part with their savings and a whole lot more. But the time has come for him to face up to his crimes!

Having canvassed the area, after the latest victim statement, Officer Philips, a tall blonde beauty, in her second week on the job, has finally located the individual in the description. A bizarre chap with an outrageous tash and a spellbinding way about him. In the house with the man, Philips, her long, perfect legs crossed, toys with her radio, as if daring him to try something so she can call it in. In fact, he IS going for something in his pocket right now, and Nicky warns him to be careful.

Producing a red rubber ball dangling on the end of a leather strap (looks familiar.) MindBender immediately begins. Allowing it to gently swing while he talks, watching the officer’s eyes grow as round as saucers, he soon has her willingly following him into the kitchen. His spell is working, and the former fashion beauty is now law enforcement putty in his hands! He soon has Officer Philips stripping comely nude and poking her tongue out at him. Her humiliation is exciting and he makes her do more before getting down to business.

His partner, the evil Mildred, is lurking nearby and comes up with the idea to pose as the cop so the neighbours will see her leaving the house again as if nothing is amiss. Meanwhile, they’ll have the real cop tightly bound and gagged some place, giving them plenty of time to clear out and move on to spellbinding pastures new!

Still well under, the meddlesome girl is led, hands up, to the third floor of the house, where she enjoys very much (at MindBender’s guidance) being tied and gagged. For a gag, he uses one of his large white handkerchiefs, securing this in place, plugged deep into Nicky’s warm mouth with a leather strap. Thus silenced and trussed, the helpless beauty is groped and enjoyed by the pervert before being left to struggle.

With him gone, the spell wanes, and soon the befuddled cop is back in the land of the thinking! Crossing her eyes in befuddlement, her efforts become more urgent, causing Mildred to suggest stringing the bitch up for her insolence! MindBender approves, and soon enough, the amazon stunner is tied, arms outstretched painfully overhead to the stairs. Here she is again felt up and left hoisted as punishment. She is NOT pleased and really works that rope. It’s thrilling watching the busty blonde whipping this way and that, gnashing at her super tight white handkerchief (another one of his) cleaved betwixt her thick, sensual lips.

After a ‘spell’ if you’ll allow us, of this cavalier treatment, Nicky is trussed up in the next room and ballgagged into blissful obedience. She has one feisty mouth, deserving of this many gags. Gurgling hotly, the nipple-pinched, naked and stripped cop is left writhing on the hardwood floor, wondering what the extra length of rope tossed at her is for.

Next, all become clears as she is roped up into a very secure hogtie while Mildred enters to show off how good the uniform – Officer Philips’ uniform – suits her. Laughing at the ferociously slobbering bound lady cop, she leaves, as does MindBender. We are left with Naked Nicky the Cop and she is gonna squirm like crazy. She simply MJUST get free before being discovered like this. She vows to search the ends of the Earth for this creep and his partner, and goes berserk as she hears them driving away in her own squad car! Her radio is in the kitchen, spitting static. If ONLY she could get to it! Fat chance all hogged up like this though! So much for her second week into the game. Perhaps she’ll go back to modelling after this one. Yeah, maybe a good idea! 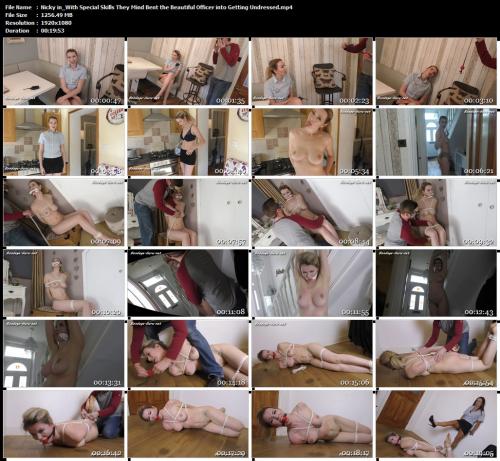 Chloe & Rebecca in: So Which One is the Heiress?? Better Take Them Both – We’ll Deal With it When We Get to the HideOut! – Borderland Bound

Miss Scarlett & Ali in: Hot Treasure Seeking Crime Solvers in Extreme Jeopardy – These Are Gags They WON’T Be Getting Off! (The Complete Story) – Borderland Bound

Jenna & Katie in: The Monumental Stripper in Distress Caper: Engineered by the Monstrous Mr Echinacea! (Extended Story & Beyond) – Borderland Bound