Ravishing mystery-solvers Pandora and Chantelle aren’t having much luck this fateful day. Humiliated at having been bound up like cattle, with tight gags tied in their mouths, truly preventing them from speaking, their gorgeous bare toes twitching while twined up too, they just wish Old Cedric would hurry up so they can get out of this! They hope he pays for their safe return, as they mash their juicy bared boobies into the hardwood floor. This fiendish ‘napper has them done up TIGHT. They’re going numb too, and their only hope is that old coot. Damn this bizarre SeaFood Market Caper they’ve been investigating. They should have known it would lead to. repercussions.

Amateur babe-sleuth, the stunning, busty Pandora cannot WAIT to sink her teeth into this latest mystery, and with her delectable dancer partner Chantelle by her side. But Chantelle isn’t by her side just yet and so the delicious naked lady shucks into a pair of blue skinny jeans (you’ll like watching her do THAT) and trots barefoot down the stairs to see what is keeping Chantelle. She fails to notice the masked character sloping up on her and by the time he has, it’s too late. He slams a hand over her mouth as she bucks her tight ass against him (mmmmmm) and bundles her kicking and wriggling into the parlour.

Chantelle, arriving late, in tight blue jeans herself, and cute vest top, is astonished to find her beautiful friend Pandora bound and gagged. Unable to warn her, Chantelle becomes aware of the danger when it is pressed into her back. Reluctantly she surrenders and while a hotly mmmmppphhhing captive Pandora watches on helplessly, she is bound hand and foot. Soon enough, with both sleuths gagged over their mouths with thick handkerchiefs, securely restrained, the creep ties their toes up with twine, and while he does this, he fills in a few – blanks!

The girls have been nosing around BullNeck’s Orchard, near to which is this dude’s allotment, on which are stored a few cases of the choicest, well-marked-up marching powder, set to be smuggled within a bunch of frozen lobsters (just doesn’t ask how they are going to get the stuff inside them without thawing the fuckers out, okay?) currently at Old Dick Gillespie’s SeaFood Market in the idyllic PiddleTown coastal village. The crooks are transporting and hiding the powder every Saturday and have a good thing going, that is, until these two meddlers stuck their pretty little oars in!

The wicked goon has our heroines locked away back here and fetches his phone, after first binding their big toes up for good measure, as detailed. Oh and how those beauties struggle and squirm with their delectable bare soles pointing our way. It’s too hot. But anyway, the old bastard they get their missions from is calling through on Pandora’s phone. Clearly not able to answer, HE answers for her, and has an idea. If Cedric ever wants to see them again, he’ll be paying UP! He removes Pandora’s gag so she can confirm she is all right and then gags her again, hard, with a hot thick cleave between the teeth. Then he does the same with Chantelle and leaves the beauties writhing around on the floor. And they DO writhe.

Later, and now he has them all pigbound up, grouping and spanking them after yanking down their jeans and underwear. Brings out the monster in him his, and he can’t keep his filthy mitts of of the poor dears. They are almost relieved when he shuts them away again, and are soon rolling around working hard to get out of this pickle. They learn soon enough however that these hog ropings are the work of a pro. They are held fast. Seems as though – as they gag chat remarkably – making much of a fuss of their glorious naked tied up feet for us (almost as though they KNOW it’s working us right the fuck up) they chew at and gnash on their thick cleave gags, bumping and grinding those tanned hips, scrunching those smooth creamy soles. 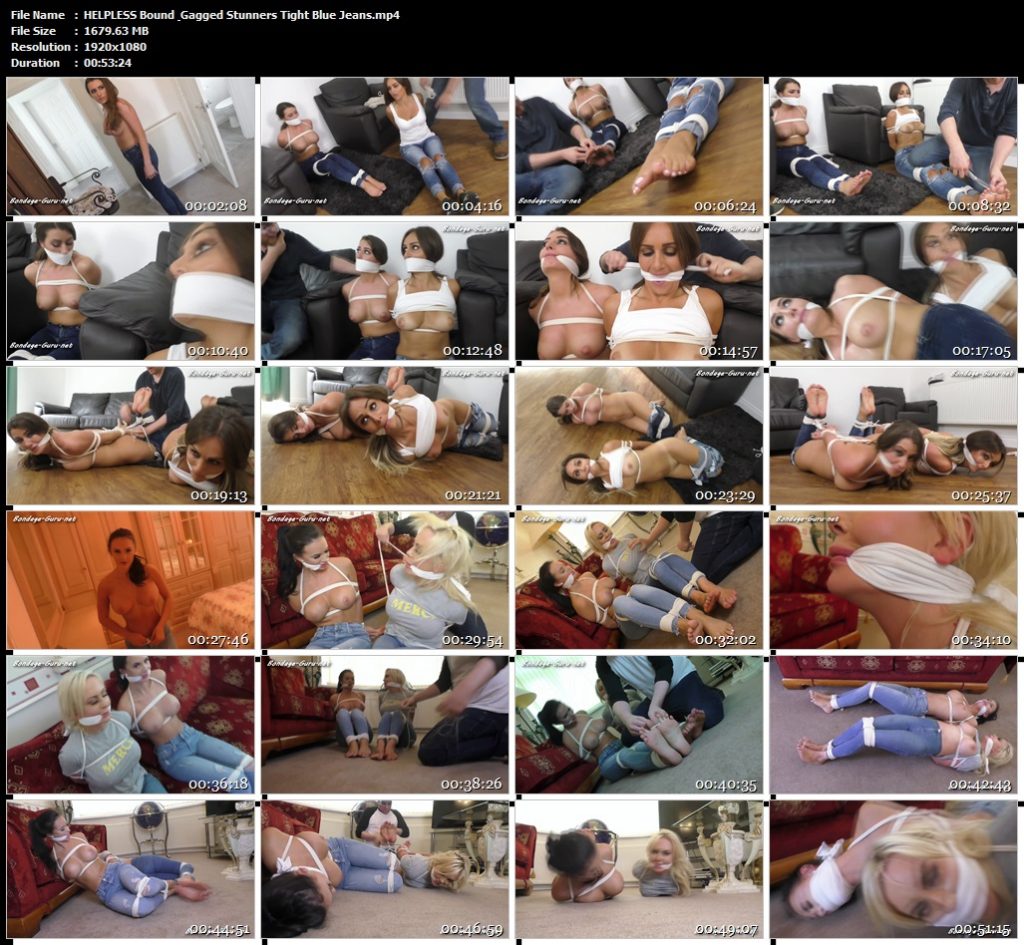