He had been hatching his plan for months. Nab this rock star bitch and ransom her back to her rich record producer douchebag boyfriend for a cool million bucks. Everything goes right as planned. After studying her habits and learning her routine, he decides to try grabbing her on her morning run. It was actually a little easier than he thought and no witnesses. He drags her inside and strips her down to her satin panties. She is even hotter in person than on TV. He forces her limp body into a hot pink spandex zentai suit, and then drags her into another room where he’s got a camera on a tripod all rigged up and ready. His plan? To tie her up in a very awkward position and make a ransom video to send off to her boyfriend. He pulls her up and ties her spread eagle between 2 beams. He sets the camera rolling and by this time, shes awake and not happy. He gags her and pulls up her hood. He collars her and corsets her tied body extra tight. He wraps more cord around her and ties a mean knotted crotchrope. He leaves her like that all strung up and goes to make the ransom call… The boyfriend as it turns out is none to concerned that his bitchy rockstar girlfriend is tied up in some warehouse. He was getting tired of all her bullshit. He tells the crook to get fucked.. He’s not paying a dime for her.. The crook is very pissed off. All that risk he took now isnt going to pay off.. He decides instead that he’s gonna do some damage to her popularity and unmask her in front of the whole world on Youtube instead… 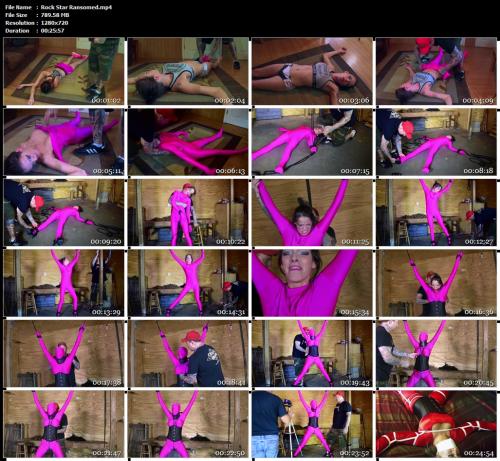 I brought you home so you can tie me up, Gag me and Well! You know