Aubree is a bartender at a fairly popular spot. Her jealous boyfriend has had enough of her coming home late after being flirted with all night. He has a notion that she is cheating on him with one of her patrons. He waits outside of her bar at closing time and confirms his suspicions. She comes out of the bar and kisses some random guy goodnight before climbing into her car to drive home.

He is very upset, but he decides to sleep on it and decide the perfect punishment for her. He stops at the all night sex store and buys a big red ball gag..

“Whats that?!” she exclaims. He shoves the ball in her mouth hard past her lips and straps it tightly behind her teeth. “MMMMPPPPHHHHFFFF”… He whips her around and binds her tiny wrists behind her. He drags her out to the den and puts her on the floor. He walks away and grabs his phone. She struggles hard to get her wrists free. She stops when she hears him on the phone with her boss from the bar.. “Yeah man, she’s super sick today and can’t come in for her shift. She’e lost her voice completely.” She tries to scream through the gag. “Yeah, see? She’s totally hoarse and can barely make a sound. I’ll have her call you when she feels better.”

She looks at him with huge eyes, wondering why the hell she’s tied up and he just called her in sick to work.

“I have my own plans for you today dear. You’re going to spend the day with something in your pussy, but it won’t be your new boyfriend’s dick…” He grabs more rope and begins to tie her. He bands her ankles and knees together. Then he wraps a doubled length around her waist, pulls it down through her crotch, yanks it tightly behind her, wraps it around her tied wrists, and ties it off to her bound ankles. Then he runs a length from her ankles, up between her bound thighs, an ties it around her neck.. Effectively “balltying” her by her crotch. “See? I told you those pants were thin.. How’s that feel?” She lets out a little squeal.

She can’t move. Even the slightest movement by any part of her body pulls that tight rope further into her pussy. “I’m going to leave to like that for awhile, but don’t worry.. We have the whole evening for fun games like this.”

She settles into the ropes, doing her best not to move and cause herself any more discomfort. She wonders what her new boyfriend will think when she’s not at work tonite. More than anything, though.. So wonders what else is in store for her this evening at the hands of this currently very upset soon to be ex-boyfriend!! 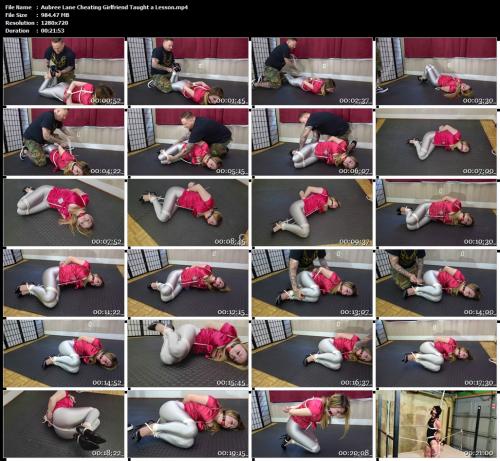