Private detective Chi Chi Medina is assigned to investigate all the mysterious disappearances linked to the haunted house. As she’s looking for clues in the study, she opens a closet door and is shocked to find herself face-to-face with a werewolf! The gorgeous gumshoe (in a minidress and heels) immediately faints, and the furry creature takes advantage of Chi Chi’s powerless condition to examine the supine intruder. The sexy shamus is next seen securely tied to a chair and cleavegagged. Her hairy tormentor comes in to check on the trussed-up detective, and he pulls open her dress for a better look at her considerable breasts. Left alone, Chi Chi energetically struggles against her bindings, but to no avail! Then she remembers she has a device on her that, with effort, aids in her liberation from the werewolf’s clutches, and she frees herself.

But instead of fleeing the haunted house, the brave detective continues her search for the missing women. She finds the dungeon where Victoria June was held earlier, but the room is now deserted. Chi Chi is investigating for clues when she’s suddenly grabbed by a lab-coat clad gorilla! Detective Medina is next seen barefoot and stripped down to some ragged clothes, tied standing with her hands overhead. The feisty damsel demands that the damned dirty ape release her, but instead he cleavegags the stunning brunette. Poor Chi Chi is left to ponder her fate, and she struggles to get free — but without success this time! The nasty gorilla soon returns and rips open her top. Chi Chi continues her valiant efforts to get lose, but she realizes she’s completely at their mercy now!

Chi Chi is then returned to the study. She’s now wearing a silky slip, and she’s barefoot, hogtied and tapegagged. She has no idea what these fiends have in store for her, but she knows she must escape! As she rolls on the floor, the delicate slip falls away and her huge chest is revealed again. Her nimble fingers search for the knots, and she manages to release the hogtie connector rope. The plucky detective gets up and hops to the door, but when she opens it she’s startled by the sight of a giant worm! She falls back in horror, and the bizarre creature attacks the bound beauty. Despite her desperate attempts to evade the monster, the voracious worm begins to eat the helpless detective. Will Chi Chi be able to escape this dreadful fate, or is she truly doomed?

The story is followed by the first episode of “The Lost Bondage Scenes.” The scene opens on the set of a 1960s-era TV sitcom. Ryan Ryans (dressed in a blouse, pleated skirt, pantyhose and high heels), the gorgeous star of the series, is detective-gagged and tied to a post. The director is giving her some last-minute instruction before they start filming when he’s interrupted by a network executive. It seems that upper management feels this scene is too sexy for TV, and it must be cut! The director argues, but he knows it’s a losing battle. Distraught, he calls for an early lunch while he works to settle the dispute. Everyone leaves the setexcept for the still bound and gagged star! The beautiful blonde calls for help through her gag, but no one hears her. She wiggles against her bonds, but the knots all hold tight! Eventually a woman from the crew finds the bound beauty, but instead of freeing Ms. Ryans, she exposes her breasts and fondles her to settle a wager. Now helpless and humiliated, poor Ryan wonders who will find her next. 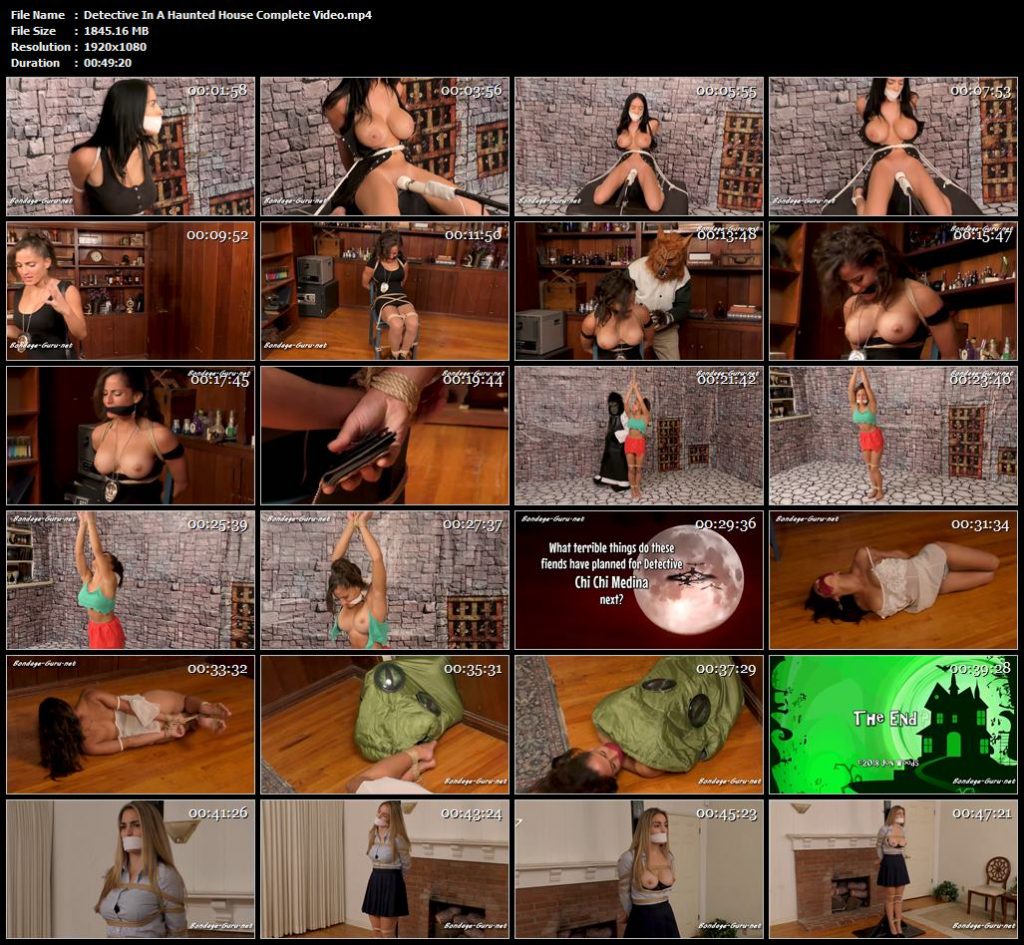