She waits a day or 2 to respond, and eventually the excitement of the possibilities outweigh her fears and she agrees to meet him. They make plans for him to come over to her house the next day to tie her up.

The next morning she begins getting ready for her play date. She carefully selects some satin panties, lingerie, and stockings to wear that she thinks she will look sexy for him. She puts on her makeup, and just as she is finishing up, the doorbell rings.

She contains her excitement well as she answers the door and ushers him in. He is cuter than his photos. He too is very happy with her outfit and tells her she looks beautiful. He sets down his bag and gets right to work. First he pulls out a harness ballgag. It looks very intimidating to her, but once he puts it on her and properly adjusts the straps, she finds it is actually very comfortable. And effective! Next he pulls out several lengths of white rope and begins to tie her arms behind her. He binds her wrists together. Then he ties her ankles. She is already beginning to feel pretty helpless, and he still has a lot of rope left! She gives a little yelp as he pulls a knotted crotchrope up between her legs, digging it deep into her satin panties and ties it off. Next he binds her elbows tightly together and wraps rope around her upper body above and below her breasts, and then pulls it up over and around her shoulders to cinch it in. It is very snug and secure. He sets her onto the floor on her belly and pulls her ankles up and ties them to her upper body harness, leaving her strictly hogtied. Last but not least, he ties her head harness back to her elbows and ties the final knot.

She can not move. She is completely helpless and now very turned on as well. She hopes that he thinks she looks sexy. She is dying for him to play with her and to fuck her. She rolls around back and forth, putting on a nice show for him, trying her best to wiggle free, or just to wiggle something in this tight tie.. 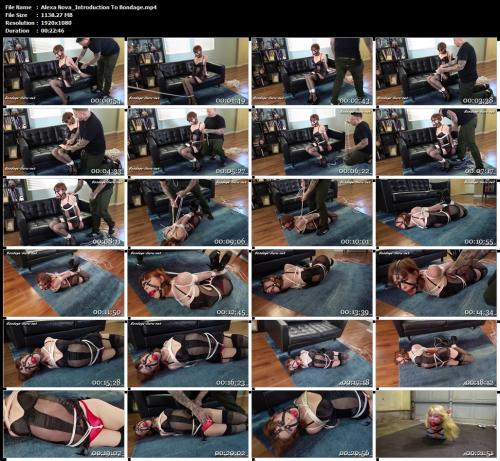