Alexa in: You Wont Be Winning The Beauty Pageant This Year, Dear Girl. The Phony Registrar Will See To THAT! (Full Clip) – Borderland Bound

Intense young beauty Alexa is about as wonderful as they come, and she knows it. For the last three years running she’s won the Miss Bacon Butty beauty pageant and rumblings in the jungle thus far is that she’ll win it hands down this year too! If it weren’t for the creepy weirdo rambling up her driveway right now, the brother of a girl who thinks SHE should win it and so has sent in the clown, as it were, to do her malign bidding. This nutjob is just up for doing some pervy things. So while he gains access to Alexa’s home and ties her up for hours, the pageant will go ahead without her. Simples!

With the busty, statuesque lovely preening in the mirror, in a skimpy black bikini she intends to wear for the big show, the knock at her door draws her down the stairs. Cautiously answering in her tiny bikini, she is a little concerned to see a masked man standing there with some paperwork in his paws. He explains the mask away by stating that he doesn’t like his face. and then quickly glosses over this filthy excuse by stating that he is one of the panel of pageant (we keep saying pageant) judges. Yes, it’s a bit weird that he’s come to see her, but if he could just get her consent signature he’ll be on his way and see her there! Reticently, the silly girl ushers him inside and it’s while her back is turned, while she signs the of course bogus docs, that he pounces!

Strongly seizing and handgagging the breath-taking stunner, he bundles her off over his shoulder. Finding a room with a nice big double bed (he’ll be using that later) he trusses the captive up with silver tape and gags her pretty gob, just as she begins to smart mouth, with two strips of expertly smoothed and slapped on tape! Mmmmmpppphhhh! He very much enjoys having the gagged girl attempt to speak with him. She can’t even part her lips as he gropes her big tits and caresses her semi naked body. Alexa cringes from his touch, especially when he begins to play with and even sniff her freshly shampooed hair! What a perverted mentalist!

Left struggling mightily on the floor, the bound and gagged lady goes ape. She HAS to make that pageant at all costs. She can’t lose Miss 2017! But she IS losing, while we are winning. Re-gagged with black tape (this guy clearly likes very roughly gagging the chicks again and again) he yanks her tits out of her bikini top and really goes to town on them as she writhes and gggmmmpphhhs away beneath him. Then the cad even tapes her hard nipples up, before later gagging her AGAIN with those same strips! Very hot. Then he dumps the struggling Alexa onto the bed, where he repeatedly gags her and fondles her jumbo boobies. He mixes it all up: Gagging, groping, nipple taping. He can’t seem to help himself. Mind you, neither could YOU, we’d wager!

He even tickles the bound girl, delighting in her shocked and involuntary squeals of abandon as he spanks her and gropes her with equal gusto. The helpless, gagged and taped beauty is then left to squirm around all over the bed, repeatedly shaking her round, firm arse, mashing her big bared tits into the duvet and thrilling us with her flawless bare feet. She really works her painted toes too and – ah, you know what?? Time to watch this. It’s gonna take you to the moon and back. And for fans of tape gaggings, this one is really focused on close up strip slapping, if you are down with the lingo. Check it out. This Alexa is yet another Borderland Gift From the Gods! 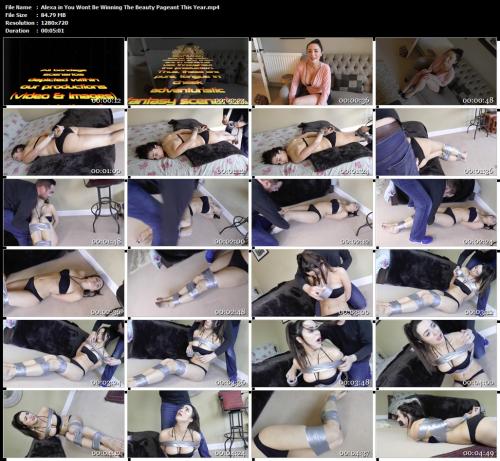