Heres my first clip with amazing Akira Shell. She starts off dressing herself head to toe in spandex. I corset her and begin layering on the rope. It should be said that Akira LOVES to be tied up in bondage.

I begin with the crotch rope/butt harness, which she likes so much she takes the liberty of doing a massive booty/twerking dance to try to get her butt loose.. Next, I pull a matching spandex hood over her head and gag her with a leather wraparound panel ball gag. Its time to start the restraints.

I pull a shoulder harness down, cinch her elbows together tight, and finish it off down at the wrists. It looks good and I’ve definitely got her attention now. I go to move to the lower body, but I notice her body language is changing for the worse. I immediately untie her arms to make sure she’s alright. OK.. Time to figure out a different strategy.

I start at her thighs (actually her crotch..) and wrap her legs tightly every 6 inches or so all the way down to her ankles. By now her arms are rested and have feeling back in her hands, so I tie a tight upper body harness to lock her arms and elbows in tight, but not affecting the circulation in her lower arms. She says it feels great, so I bind her wrists and pull her over and up into a strict hogtie.

Now Akira is in the zone. Blissful and in her happy place, she struggles but can not move anything but her fingers. She tries to roll over, but she can’t even do that. Fully encased in spandex, bound at every , and gagged.. She is a spectacular sight.

I come back in and roll her over onto her side, exposing the front of her body and the rest of the tie. The ropes lie neat and layered, no matter how much she tries to wiggle. The crotch rope digs deep into her soft spandex covered pussy and she goes back and forth between moaning and giggling. She loves ever second of this.

As we draw to a close, I release the knots holding her feet and let her try to get herself free. She rolls around all over and mostly succeeds in freeing her legs.. But that upper body harness and crotch rope are there to stay.. 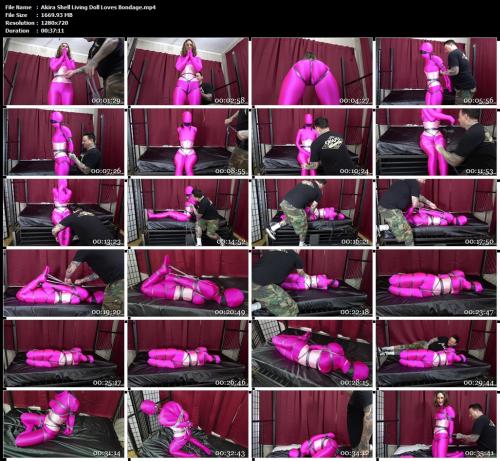