Samantha is excited to get home from work today. According to Amazon, her new spandex disco jeans have been delivered! She gets home and sure enough they are on her front stoop. She heads straight for her room, rips open the package, and tries them on. They fit perfectly! She sits on the bed and runs her hands up and down her legs and body. They feel so nice.. “You know what would make this better..” she thinks out loud.. “If I could be bound as well!” She reaches over beside the bed and grabs a small length of rope. “Wait a second.. I was told not to touch this.. It’s my roommate’s and she said she was using it in some spells or something weird.. Hmm.. Well she is not home until tomorrow and she will never know..”

She fusses with the rope, trying to tie her hands in front of her with little success.. Frustrated.. She throws the rope on the ground. “I WISH I was bound.. But I guess I willl”…. POOF! With a flash of smoke the rope grows longer and ties her wrists behind her!

“Wow this is amazing!” she says excitedly. “I wish my elbows were tied together!” nothing happens. “I SAID, I WISH MY ELBOWS WERE…” again POOF! Her legs are now tightly frogtied under her.

“Ummm.. I said ELBOWS! Not my legs! Stupid rope!” She rolls over and lays on her back. “Ok, now I want my ELBOWS tied!!” POOF! An crotch rope appears. The magic rope tightens automatically and she can feel it digging into her pussy through her pants.

“Ok.. you win. This hurts. Untie Me Now!” POOF! Her elbows are welded together behind her with more magic rope. “Oh.. NOW you do you elbows!?” She struggles. That crotch rope continues to slowly tighten.

“Ok.. Please..” She says changing her tone. “I don’t want to be tied up anymore..” POOF! More rope hits her body and wraps her torso, harnessing itself around her shoulders, and banding her arms to her body in a strict hug. A neck rope wraps around and she can feel it also slowly tightening. A ballgag also dangles around her neck.

“Oh my god! What is this?!” she exclaims. “This is too much! I can’t move! Let me out NOW!” She struggles around and the rope is tightening past uncomfortable. “Ok, enough is enough! UNTIE ME NOWWW!” POOF! the ballgag jumps into her mouth and inflates, filling her mouth completely.

“MMPPFFHHH MMPPHHHFFFFF!!!” she futilely screams though the gag. POOF! A thick strip of tape appears over the top of the gag, sealing her lips around the ballgag. Now not able to utter a sound past a low moan.. and with the crotch and neck ropes still tightening on their own.. She lays there wishing she had just enjoyed her new pants and not touched her roommate’s magic rope!! 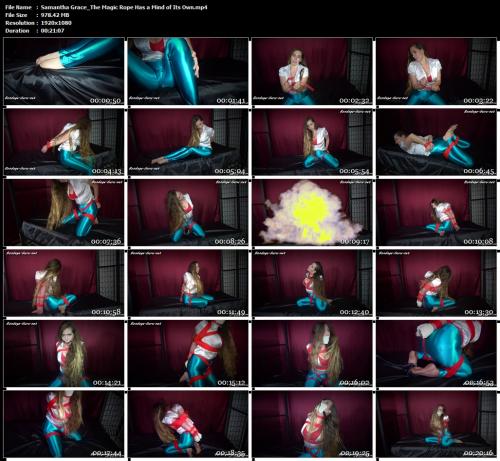