Nyxon runs to the door when she hears the delivery guy knock. She has been waiting for weeks for this package to arrive! She rips open the box and reads the note inside. “Acme Animation Potion- Bring inanimate objects to life!” Her mind races! She knows EXACTLY what she is going to use it on! In her haste, she doesn’t read the fine print below “Warning: Do NOT use on rope!”

She takes the bottle of magic potion into her bedroom and sets out a large coil of yellow nylon rope and a roll of duct tape. It has been so long since a guy has had any interest in tying her up, and she believes this is the best alternative. “Now I can be tied up as much as I like without having to worry about waiting around for somebody to do it to me..” she thinks to herself.

She eagerly sprays the potion on the pile of rope and stands back. Nothings happening.. She looks at the bottle. Just when she is starting to think she got ripped off, ZING!

The rope rips off of the trunk and wraps around her wrist! Before she can say “Wow, it works!”, it yanks her onto her bed and attaches itself to the bedpost. The next rope follows suit, ripping open her satin blouse and yanking down her skirt. It coils back up and under her, wraps around her waist and up between her legs, and then constricts itself extremely tight, making a crotchrope!

Nyxon grabs the crotchrope with her hand, partially excited, but still in shock by how fast and tight the ropes are working. The next rope grabs that free wrist and yanks it up to the other bedpost! Now helpless with arms spread, the duct tape rolls up the bedspread and launches onto her face, layering tape over her mouth!

Nyxon’s eyes open wide in disbelief! Now that she has lost control of both her arms and can’t possibly yell out for help, she is getting more nervous. Again the ropes attack, wrapping and frog-tying her legs and then attaching themselves to either side of the bedframe, stretching and spreading them wide apart!

She should have read the warning.. 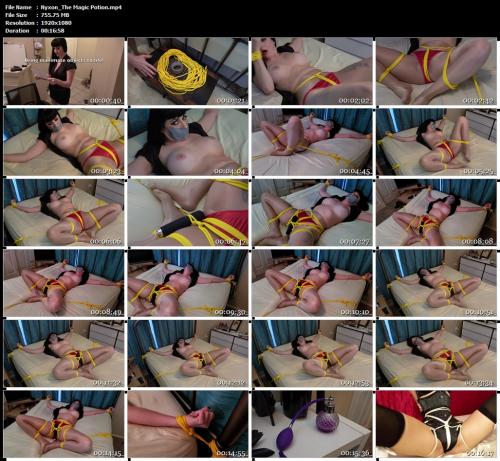