Sexy Naomi loves the feeling of silky nylons and tight ropes, but her boyfriend isn’t really into bondage and always half-asses it when she asks him to tie her up. She really wants to be tied and helpless for a full night, or longer. But her boyfriend always makes up excuses or tells her it’s too dangerous to try. One day she mentions it in to a friend and the friend tells her about a guy she knows that is really into bondage. After talking and getting his details, Naomi decides that when her boyfriend leaves for business this weekend, she is going to invite this guy over for a fun night of bondage!

The night finally arrives and Naomi puts on a pair of thick shiny nylons and her favorite black silky leotard. She brushes her hair and then the doorbell rings right on time. She opens the door and welcomes him in. He is carrying a backpack which to her delight is full of shiny white nylon rope. She tells him that she wants to be tightly tied up and left like that until morning, and no matter how much she begs or tries to call out for help, he is to leave her tied and gagged. He asks her if she is positive that is what she wants. She looks at him in the eyes and repeats herself “Do not let me out of it until morning.”

He agrees, pulls the rope and a big ballgag from his bag, and begins to very tightly wrap the rope around her body. Naomi is overjoyed as each rope is neatly banded around her legs, starting at her thighs and knees, and then finally her ankles. He then grabs more rope and boxties and harnesses her upper body, cinching things in such a way that there is no way she will be able to slip it off. After he has her tied from head to toe, he asks her one more time if she wants to back out. “Gag me.” she commands.

He pushes the ball far back into her mouth and straps it behind her neck. She lays down on the bed and he gives her a few moments to get used to the rope and wiggle around. As she does, she realizes just how helpless she is. There are no knots within reach and no way to struggle or slip a rope free. He grabs his backpack and pulls out more rope. “OMG, what is he going to do now? I am already tied so tight!” she thinks to herself.

He pulls her around and lines her up in the center of the bed. He ties her ankles to the footboard, and then anchors her hips and upper body harness down to the side rails in a similar fashion. Finally, he ties a rope around her neck with a non-slip knot and ties up to the headboard.

She thought she was tied tight before, but now she cannot move an inch in any direction. Her arms are tightly bound and pinned beneath her. She can’t sit up or look at anything but her ceiling. All she can do is wiggle her nyloned feet and rub them together.

“Alright then, looks like my job is done. Have a good night. I’m gonna crash on your couch and I’ll come let you out in the morning.” he says as he turns out the light. Now in darkness she lays there inescapably bound and gagged. Panic sets in. What was she thinking?! She tries to struggle but there is no give! She tries to sit up again or move, but she is lashed down tightly in place.

After an hour or so, she is over it and ready to be let out. She isn’t comfortable and she just wants to stretch out her arms and go to sleep. He hears her calling out for help in the next room, but remembers she made him promise that no matter what, he would not release her until morning. Frustrated, she fights and wiggles, desperately trying to get free. Tears stream down her cheeks. A few hours later, fully exhausted she finally drifts off.

The next morning she is awoken by the light switch. She quickly realizes that she is still tightly tied down and again panics. He tells her to relax and he will have the ropes off in a moment. She lies there as he unties her, very sorry that she put herself through this dramatic ordeal. 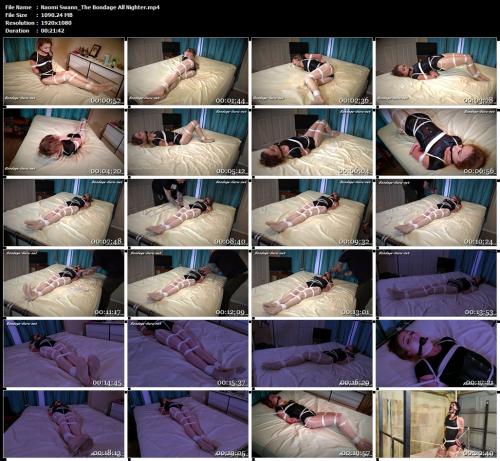