As we open, Nyxon looks as if she’s resting in bed, but as the satin sheets draw back.. We see that Lauren is helplessly hogtied between Nyxon’s legs with her ballgagged mouth dug deep into Nyxon’s silky crotch. Nyxon flips Lauren over on her back and runs her sharp fingernails over the helpless girls sensitive spandex covered body. Lauren squirms in ecstasy. “I know what you want”..Nyxon grabs the Hitachi vibrator and strokes Lauren’s pussy, building her to one huge orgasm and then another.. Nyxon now exhausted and needing to finish her rest ties Lauren down to the bed spread eagle, curls up beside her, and closes her eyes for the night. Lauren however is not tired and still has more orgasms in her. She nudges Nyxon over and over, refusing to let her rest. Finally, a very frustrated Nyxon ties the hitachi to Lauren’s crotch rope. “You want to keep me up all night? I don’t think so…” She turns the hitachi on full blast. Lauren’s body jumps and quivers. “Enjoy your fun night. I’m going to get my beauty rest..” Lauren’s eyes open wide in disbelief! “MMMMPPPHHHHFFF!!!” Nyxon grabs her pillow and heads for the living room couch, leaving Lauren helplessly bound, ballgagged, and at the mercy of the Hitachi’s full force. 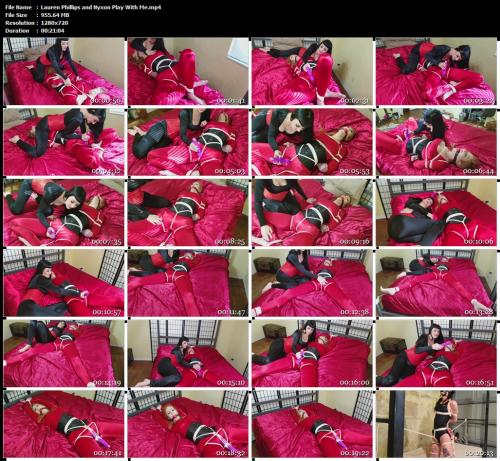