Detective Tracy Johns got the call on Valentine’s Day. It was a cartel retaliation. The four broads were the wives of top mafia bosses in town. The mob was fighting a war with cartels south of the border. The mob called Det Johns to go help out with the problem. Somehow as she approached the crime scene, she had a premonition of what she would find… scene opens with Vicky Vixxx walking through the door greeting the three MILF mob wives already inside. Amanda Foxx, Valerie Grand and I are dressed to the nines in anticipation of a nice dinner out with our husbands to celebrate Valentine’s Day. We brag and boast to each other about the good life. Valerie has just married her mob boss and we seasoned wives laugh and give her pointers about what it takes to be a good mob wife. We flash our lingerie and check each other’s elegant fancy clothes and shoes. Vicky goes into the bedroom to put on her new dress while Amanda enters the bathroom to strip and show us her fancy under garments and I walk into the kitchen to get more wine. As I’m looking for a new bottle, I am suddenly stealthily ambushed from behind by a dark figure. I look back to see a masked woman in black. I try to scream out to warn the others, but can only manage to gasp and gurgle in the brutal choke hold. I struggle hard but my moaning is muffled and her hand over mouth silences me until the fumes overtake me and everything becomes cloaked in darkness as I fall limp into the woman’s arms. Valerie is busy checking her bra and boobs as the dark villainess sneaks up behind and attacks catching her off guard. Valerie puts up a small fight, but the hit woman Angel Rose is too strong and soon Valerie slumps down. The masked fiend encounters Vicky in the bedroom tip toeing behind her with a rag in her hand. She clamps a hand tightly over Vicky’s mouth and nose. The women fall onto the bed with the brute on top holding her down subduing the tall blonde until she lays motionless on the bed. Finally the evildoer moves into the bathroom for the last target. Busty blonde bimbo mob wife Amanda stripped to her lingerie & so self absorbed in the mirror she doesn’t realize her peril until it is too late. The stealth masked woman sneaks up on Amanda while she’s checking her makeup and Amanda too succumbs to the ruthless and proficient attacker. She drags Amanda’s limp body into the living room where the other three mob wives lay. She then pulls some ropes from her bag and starts to tie up four women. The four MILFs are now all bound and I wake up as she is just finishing off tying my legs. I struggle to sit up and scream at the bitch. Don’t you know who we are!!! You are finished now. Our husbands will see to your demise. I threaten her and try negotiate, but the evil one picks up a gag and roughly shoves it into my and silences me. At this time the other women begin to wake up and struggle and moan. Amanda remains calm at first and offers Angel money. Poor naive Valerie sobs and cries as the cruel enforcer exposes her breasts and fondles her body. The cold evil woman smiles as she makes her way around the room groping each of us pulling out our tits and asses. The pitiless bitch stands back – slick, professional, ruthless and efficient – she watches the four of us struggling then she grabs a plastic bag and waves it with a cruel heartless smirk. Well ladies, I wasn’t sent here just to tie you up and grope you. The cartel paid well to send a strong message to your husbands… 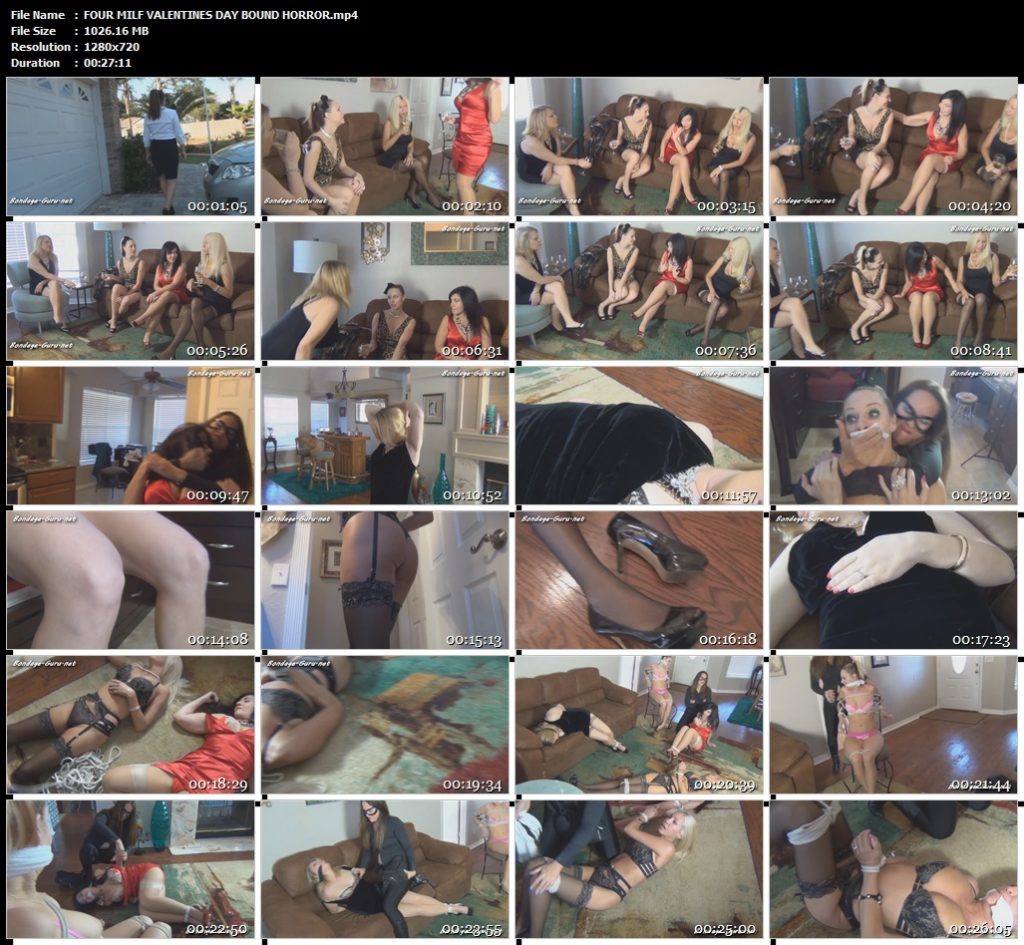