Captured Beauties – Alba And Sibyl Gang Up On Sarah Fyah…

Sibyl meets with Alba. She wants to talk to her about a problem. Sybil’s partner Sarah Fyah wants to run their dance club in her own way. Sibyl then asks Alba for help to get rid of the bulky partner. In return, she will become the prima ballerina of her club and participate in the proceeds. Enthusiastic Alba promises her help. When Sarah enters the house, not knowing of the peril, Alba and Sibyl ambush her. They are in two and took Sarah by surprise. She ’s strong but lei can’t do much against the girls ganging up on her, so she’ s soon tied up and cleave gagged (some on screen tying is shown). Alba and Sibyl congratulate each other. Capturing Sarah wasn’t difficult at all. She struggle furiously but can’t do anything because Alba tied her up pretty well. Time for a cigarette before carrying Sarah in another location where they can get rid of her. Left alone Sarah struggles. She can’t find a way to scape because the ropes are tied enough but she could crawl in another room trying to find something that could cut them. She should be fast before the girls arrive. Sarah is lucky. She reaches the kitchen and finds scissors in a drawer. She can cut the ropes and then pay back the traitors. The first who arrives is Sibyl. She she’s attacked by Sarah who is too strong for her and is also very angry. Sibyl is soon tied up with lots of rope. Sarah make sure that she’s tied very tight and painful. Sibyl calls her bitch so Sarah decides that she needs to be silenced and cleave gags her. After 5 minutes of work Sibyl is tightly trussed up on screen: hands, legs, chest and waist. She has no chance of escape and has to hope that Alba doesn’t fall in the same trap. Unfortunately for her Alba, not imagining that Sarah is escaped, finds hell all tied up and is immediately grabbed by Sarah. Soon she joins Sibyl in bondage. Both girl know that Sarah is very good with rope and escaping is difficult even cooperating. Sarah enjoys leaving them struggle for some minutes. Alba and Sibyl are terrorized by what Sarah can do to them and cant ‘coordinate their action. Alba is not even aware that there’s a way to cut the ropes nearby. After having left them to think about their situation Sarah comes back, hogtied Alba and ball ties Sibyl. They wonder what she’ll do next? Sarah is vengeful and they will have plenty of time to regret for their actions.
Dialogue in English 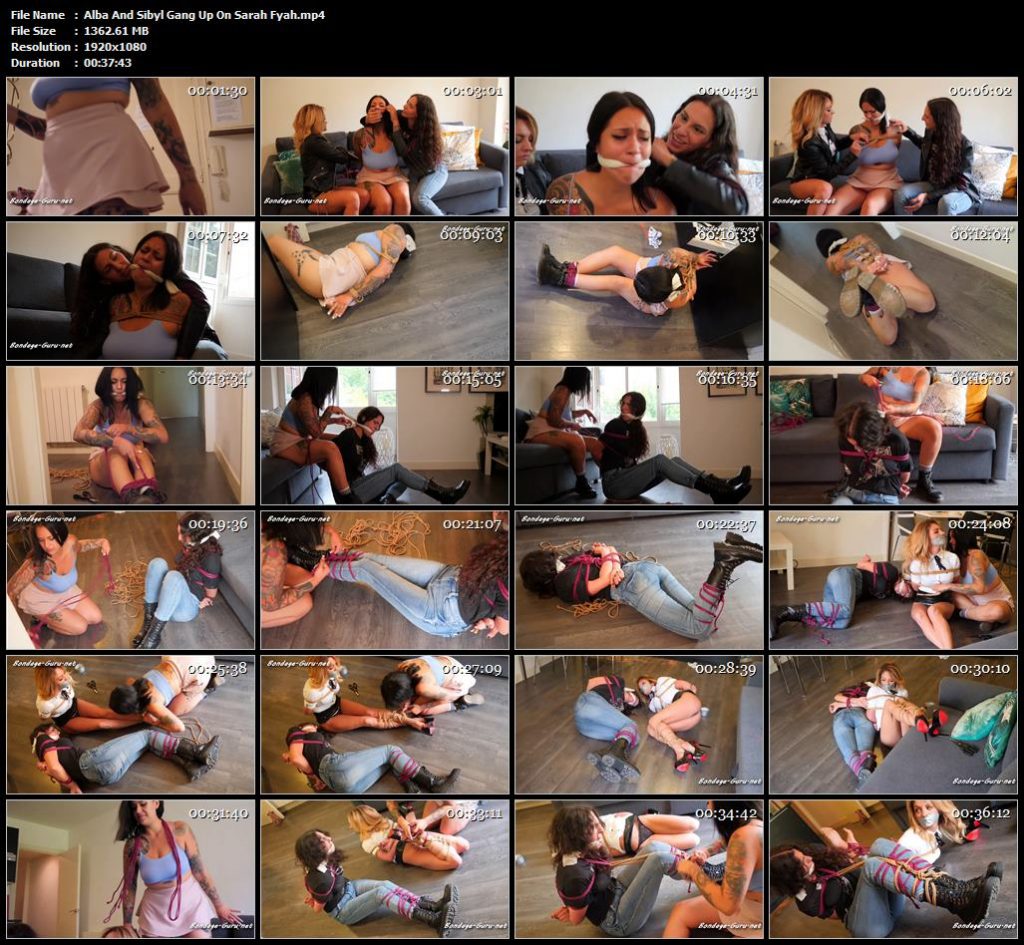